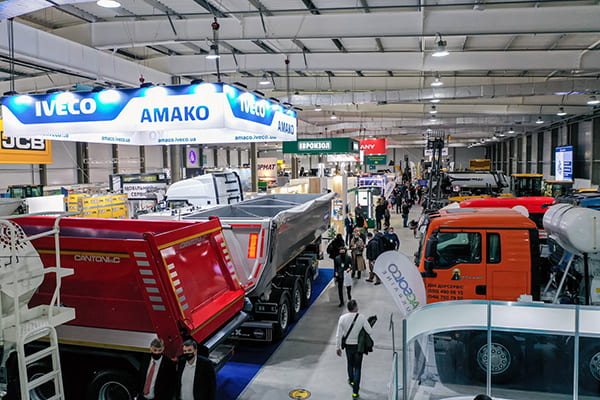 The 19th International Trade Fair AVTODOREXPO was successfully held in Kyiv on November 10-12. The current has become the largest in recent years - in terms of an exhibition area and a number of participants. More than 2 thousand industry experts from all over Ukraine and abroad attended the fair.

The beginning of November, which is also an ending of the road construction season, is a traditional time for road experts from all over Ukraine to meet at AVTODOREXPO fair. This year's edition featured 105 companies from eight countries, that represented more than 200 brands in 43 product categories.

With more than 13,500 square meters of the exhibition area, there was a lot of machinery on display at the fair. Asphalt pavers and rollers, road milling machines and loaders, excavators and graders, road marking machines, cranes and lifting equipment, tanks and trucks, commercial vehicles and municipal equipment were shown live in the exhibition pavilion and on the open-air site. The fair exhibitors also presented technologies for the production of asphalt concrete mixtures and bitumen emulsions, special materials, reinforcement and chemicals for the road industry, road and signal signs, traffic lights and lighting, barriers and protective equipment, reflective and noise protection screens, laboratory equipment, quality control solutions and much more.

The largest and the most varied exhibition stand of all was owned by the AGSOLKO UKRAINE Company. The selection of special equipment had a three-ton CHANGLIN front loader, an EVERUN front loader and a CHL forklift. The company also exhibited concrete mixer vehicles and trucks by the famous Chinese brand SITRAK. The show also became a platform for the all-European premiere of the electric JAC truck. The motor of 130 horsepower and a 97-kW battery lasts for 200 kilometres of a ride and transportation of goods weighing up to 2,150 kilos. Charging of the truck batteries from 0 to 80% takes 2 hours only.

The official dealer of SANY brand – PEGAS ST Company – was participating AVTODOREXPO with the SY155W wheeled excavator weighing 15 tons and a bucket of 0.7 cubic meters, and the STR100C-8S tandem roller weighing 10.5 tons and a drum width of 1900 millimetres.

The newcomer of the exhibition – ALFATEKS Municipal Equipment Plant - presented the XCMG XCT25L5_S truck crane. Its lifting capacity reaches 25 tons, and the U-type crane arm, manufactured using the technology of the German company Liebherr, has a length of 10.5 to 41 meters.

The TRINITY GROUP Company presented Matacryl polymer coatings for pedestrian and road surfaces, steel and concrete bridges, that is five times more resistant compared to asphalt concrete. The company also presented cold asphalt concrete made by American company QPR, which does not require mixing, mechanical compaction and can be paved without heating.

The high-tech innovations were also offered at the fair with DJI Enterprise unmanned aerial vehicles presented at the QUADRO.ua stand. Used in the road industry, they can simplify engineering surveys and design, monitoring the construction process and the condition of roads.

Along with the exhibition, AVTODOREXPO was a platform for a scientific and practical conference Modern Materials and Technologies for the Construction and Repair of Roads, organized by the M.P. Shulgin State Road Research Institute DerzhDorNDI. An opening report of the event was presented by the Deputy Chairman of the State Road Agency of Ukraine Andriy Ivko, who summed up the results of the industry in the current year and unveiled the plans to build 24 thousand kilometres of roads over the next three years. The two-day conference program also included reports by scientists on the current construction standards and presentations, as well as by private companies on their latest developments for the industry.